Who created the cartoon?

Vicky Xu has supposedly been targeted by a troll with a `sexist` image.

Vicky Xu has posted on Twitter what purports to be a sexist image from a `troll` who is impersonating her.

The cartoon depicts the Taiwan President, Tsai Ing-wen, as any China watcher would know. The male figure is Ko Wen-je, who is a pro-Beijing politician. The image has been doctored to depict Xu and an unknown assailant labelled simply as `Australian lawmakers`.

Although this has been retweeted as harassment by the `zombie` Xu followers, such as Drew Pavlou, it actually sends a pro-Xu message that she is being `fucked` by Australian lawmakers - a position she takes publicly.

This, in itself, creates questions about exactly what her intent was in sharing and archiving this image and who created it.

One needs to ask "Who benefits from this image?" ASPI`s latest report alleges that Asian women, such as Vicky Xu, are relentlessly trolled with sexist images. In a breath-taking leap of speculation, they claim that these emanate from China. Naturally, they offer no evidence of this except to highlight accounts which are obviously fake.

The truth is, one simply cannot tell who created this fake account Xu highlights. One cannot rule out that it was Xu or one of her followers, in order to generate the `evidence` to support the claims of the ASPI report. Note the proximity of these tweets.

Note the date of the archive and the dates of the trolling, all October 19th. This is a troll who tweets this single image for one day. Consider how one would troll, if one`s intent was to harass? Surely you would troll over an extended period. The author of these tweets needed evidence, quickly, in spades.

The original cartoon has no sexist intent. It is political. It wants to show the alleged under-mining of the Taiwanese President by her opposition.

The intent of the doctored image is also not sexist. If this was sexist, it would depict Xu as somehow inviting sexual favours. This is not the message.

The message is clearly that Xu is being violently violated by Australian lawmakers. The message is that we should feel sympathy for Xu.

Ultimately, we may never know who created this tweet or what their intent was. This is uncertain. What is certain is that the `zombie` researchers at ASPI will use it as evidence.

Other articles on this topic

Techniques for smearing a countryDrew Pavlou and Andrew Phelan, well known to be anti-China, give the perfect illustration of the misrepresentation of an event by re-tweeting a selective edit of a video.

Propagandist: One who retweets a deliberate misrepresentation of an event -> Propagating a lie 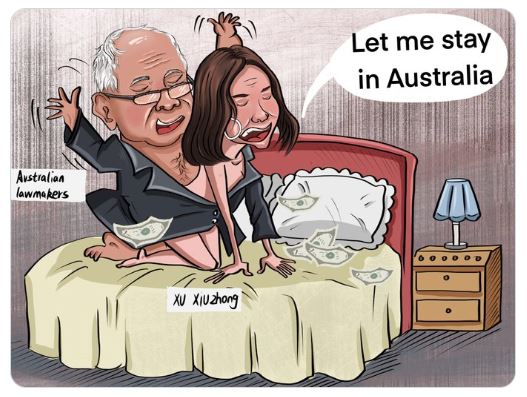